We’ve been to Israel three times in the last two years. Bill has been there because he’s serving a three-year term on the board of the Caspari Center located in Jerusalem. And I have been there because there’s no way that I’d miss going to the Promised Land.
While Bill’s been in his meetings, I’ve put together my own freelance small serving opportunities, prayed at a couple of prayer ministries based in Jerusalem, visited with a friend who lives in the country, and done a lot of solo wandering and listening. I am there to learn about Biblical history, archaeology, Middle-Eastern culture, Jewish life, and to participate in some of the the ways that believers in the Land come together to fellowship in Messiah. I am there to wait and to wonder and to worship. I am not underselling it to say that being in the land has changed my life.
This trip, Bill’s board work and my hunger to learn merged in one amazing day that was put together by the Caspari team. When people ask Bill or I about what Caspari does in Israel, we usually tell them about Caspari’s supportive role to the Messianic congregations in Israel, providing training for teachers who work with children, access to a 6,000 volume theological lending library, leadership coaching, reconciliation work, and cataloging of stories about the Messianic community that regularly appear in Israeli media.
But Caspari does much more, and on our last day in Jerusalem, we were privileged to sample the kinds of learning opportunities that the ministry creates. They dubbed the day “The Jewishness of Jesus and the Messianic Movement”, which is a fairly generic title for what was a unique, rich day. A group of about 20 of us – a mix of board members, staffers, members of other ministries, a couple of local academics – began by heading to the Wohl Archaeological Museum. Though Bill and I had walked through this place on our own on an earlier trip, this time, we were led by a man working on his PhD and had been living in the land for more than a decade. He offered amazing insights to the displays we viewed that tied Scripture to the stones before our eyes, putting the words of Jesus into first century context. One gem that I’ve been polishing from the visit was the idea that the “many mansions/many rooms” (depending on your translation) to which Jesus referred in John 14:1-4 was not a series of suburban McMansions, but one big house with many spaces: a community. Standing in the footprint of ruins, it was easy to see the floorplan Jesus had in mind when He spoke those words. 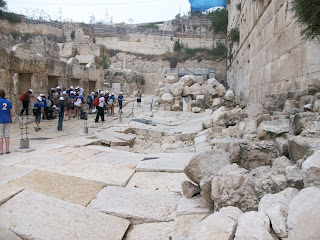 We then walked through the Southern Wall excavations, right around the corner from the famed Western Wall before we grabbed a quick felafel in the Old City. We then headed back to the Caspari offices for two discussions led by two Israeli leaders who offered their (wildly divergent) views on how Jewish identity and theology should be expressed in the Messianic movement today. As one of them noted, “If you have fifty Jews in a room, you’ll get seventy-five opinions”. One man’s position was that the Holy Spirit internalizes the Word and transforms us; thus, his congregation wasn’t particularly shaped by the addition of rabbinic tradition to its practices. The other man strongly (!) disagreed, and took the Gentile church, from Nicaea forward, to task for severing itself from its roots. Rabbinic practice helped his network of congregations worship Jesus.
There aren’t many ministries in the world that could bring these voices together in one place. (And fewer still that could do it in THE place – Jerusalem.) But Caspari does, with the understanding that the sparks that fly from passionate, divergent views come from iron sharpening iron.
If you’re headed to Israel – or if you’re here in the U.S., hoping to learn more about the roots of your faith in an even-handed way – I’d encourage you to connect with Caspari.
Sharing is caring!