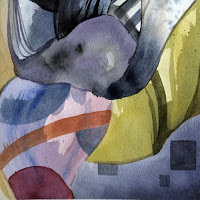 Our youngest son Jacob, 23, regularly surprises us as he’ll offhandedly recount a little snippet of a childhood memory. He remembers the shape of trees, the location of a neighborhood kid war, the texture of food on a plate. I’ve long since forgotten the details that are vivid brushstrokes inside of him.

He’s an artist now (illustration major at Northern Illinois University), and this deep gift of perception spills onto his canvases and sketch pads. Perception for him is more than just an internal cataloging of sensory input. It has to be expressed.

“‘He has blinded their eyes and deadened their hearts, so they can neither see with their eyes, nor understand with their hearts, nor turn—and I would heal them.'” Isaiah said this because he saw Jesus’ glory and spoke about him. Yet at the same time many even among the leaders believed in him. But because of the Pharisees they would not confess their faith for fear they would be put out of the synagogue; for they loved praise from men more than praise from God. Then Jesus cried out, “When a man believes in me, he does not believe in me only, but in the one who sent me. When he looks at me, he sees the one who sent me.”

Jesus didn’t speak these words in a quiet, conversational tone. This was an emotional, raised-voice exclamation point statement meant to make an unforgettable impression: Don’t just look at me – turn to perceive me, eyes, ears and heart. You’ll be restored. You’ll know the Father. Full perception will bring courageous, unblinking expression of that faith, spilled onto the canvas of your life.

May it be so for each one of us.