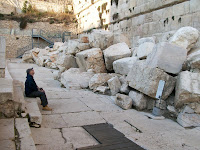 Though I’m fighting a serious case of respiratory illness, I wanted to share one of the most profound images of our recent trip to Israel. Just a few hours after we landed in Israel, Bill and I had made our way to the Western Wall, the holiest site in Judaism. We separated, as men and women have separate areas in which they’re asked to come to the wall, and spent time in prayer and lots of observation. Orthodox Jews predominated the crowds, but there were a number of other gapers and seekers sprinkled amongst them. (Us, perhaps, included in that group.) We tucked our own written prayer requests between the cracks of the ancient stones as so many have before us, and left after snapping a few pictures. It was a pretty standard visit.

We then paid 30 shekels each to visit the Ophel Archaeological Park, to the south and west of the Wall. As we explored the ancient ruins, we rounded a corner and saw the pile of stones in the picture above. The giant stones are a remnant of the rage and destruction that came in 70 A.D. when the Romans destroyed Herod’s temple. This is the true wailing wall – a sight of sorrow, even nearly 2,000 years after it happened and of fulfilled prophecy from a generation earlier:

“Jesus left the temple and was walking away when his disciples came up to him to call his attention to its buildings. ‘Do you see all these things?’ he asked. ‘I tell you the truth, not one stone here will be left on another; every one will be thrown down.'” – Matthew 24:1-2

(Keep reading in Matthew 24 to remind yourself of what else Jesus had to say about what would and will follow the destruction of the temple.)

Perhaps because this site was so stark, so unexpected, it nearly took my breath away. There were no praying pilgrims here. The scene was silent and sad and true. It was also a spilled out basket of multi-ton blocks that serves as a promise; CSI evidence that we are indeed at the end of things, and that Jesus’ words are true. He is coming back.