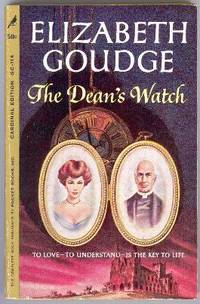 I’m re-reading Elizabeth Goudge’s The Dean’s Watch, a Christmastime treat to myself. (Ignore the lame dustjacket cover at left. The book is wayyyy better than the picture would ever lead you to believe.)

Take a few moments to enjoy her beautiful description of a life completely surrendered to God:
“…she took a vow to love. Millions before her had taken the same simple vow but she was different from the majority because she kept her vow, kept it even after she had discovered the cost of simplicity. Until now she had only read her Bible as a pious exerise, but now she read it as an engineer reads a blueprint and a traveler a map, unemotionally because she was not emotional, but with a profound concentrations because her life depended on it. Bit by bit over a period of years that seemed to her long, she began to get all her scaffolding into place. She saw that all her powers, even those which had seemed to mitigate against love, such as her shrewdness which had always been quick to see the faults of others, her ambition and self-will, could by a change of direction be bound over in service to the one overmastering purpose. She saw that she must turn from herself, and began to see something of the discipline that that entailed, and found too as she struggled that no one and nothing by themselves seemed to have the power to entirely hold her when she turned to them.
“It was then that the central figure of the Gospels, a historical figure whom she deeply revered and sought to imitate, began at rare intervals to flash out at her like live lightning from their pages, frightening her, turning the grave blueprint into a dazzle of reflected fire. Gradually she learned to see that her fear was not of the lightning itself but what it showed her of the nature of love, for it dazzled behind the stark horror of Calvary. At this point, where so many vowed lovers faint and fail, Mary Montague went doggedly on over another period of years that seemed if possible longer and harder than the former period. At some point along the way, she did not know where because the change came so slowly and gradually, she realized that He had got her and got everything. His love held and illumined every human being for whom she was concerned, and whom she served with the profound compassion which was their need and right, behind the Cathedral, the city, every flower and leaf and creature, giving it reality and beauty. She could not take her eyes from the incredible glory of His love. As far as it was possible for a human being in this world she had turned from herself…”
Have you ever known anyone like Miss Montague?
Sharing is caring!