I posted this creative take on the Babel account (below) from Genesis 11:1-9 last February, but it bears repeating here as I continue my chronological journey through Scripture exploring the themes of our identity and experience as exiles. My goal in this series is to offer some helpful thoughts about how Christ can reshape that identity and reorient our exile wanderings so we journey as pilgrims. To read earlier posts in the series, go to the “Blog Categories” pull-down menu in the right column of this screen and click on “Pilgrim’s Road Trip”.

Sassan mopped his brow with the edge of his sweat-soaked tunic. He needed a few moments respite from the relentless heat. Sassan walked down the just-laid course of steps toward an urn of water tucked into a shaded corner. He cupped his filthy hands into the warm, gritty liquid, ladling it into his mouth and allowing it to spill down his chin. Sassan closed his eyes for a moment, willing himself to experience relief. But there was none.

Not at this altitude.

Fifteen seconds later, he wiped his face again with the back of his arm. The air at the pinnacle of the construction site felt like the smoky heat rising from his child-wife’s bitter, burnt loaves.

He turned, palming the newly-built wall behind him, and looked down. He could see an eagle’s aerie tucked into the peak of a mountain. The vista stole Sassan’s breath from him.

No one except the Most High had ever seen the world from this vantage point – until now.  He ran his damp fingers across the almond-pale brick, leaving streaks of wet gray in their wake.  Bricks, created from the same earth from which Sassan had been created.

Satisfaction was swallowed by thirst as Sassan looked up toward the tissue of thin clouds streaking blue sky above his head. They weren’t there yet. His soul’s thirst for there, for more, could not be slaked with gritty water hauled up thousands of tower stairs by slaves.

This beautiful tower had claimed the lives of countless men hauling loads of their beautiful baked bricks up the narrow steps of the tower. There had been some discussion when the tower was first being planned about whether cut stone might not make a better building material. Sassan’s own father had changed the course of the project with a single sentence: “The work of our own hands will bring us to Him.” The phrase had become a song sung by the women forming and baking the bricks.

“The song sounds like a prayer, but it is just another way to name the thirst,” Sassan thought, mopping his brow again. He cursed the heat, then turned to climb back up the stairs to the foreman’s post. At that moment, he spotted one of his crew curled up asleep under a half-built wooden scaffold three levels below.

He crept down the narrow steps like a panther, then kicked Ahirom in the small of his back.

“What….?” Ahirom was instantly awake. He leapt to his feet, nearly losing his balance before flattening himself against the brick. “Oh, it’s you, Sassan. I’m sorry…I’m just a little…”

“You fool,” Sassan growled. “I gave you a second chance just days ago when I caught you doing this exact same thing. I showed you mercy then. Remember?” He didn’t wait for an answer. “Not this time, Sassan.”

“This is no time to get tongue-tied,” Sassan wiped the sweat from his forehead. “You deserve every bit of punishment the council is going to dole out to you.”

Ahirom put his hand over his mouth. It looked like he was going to be sick. “Men jeg er meget syk,” he said.

“You’re dead wrong if you think speaking like an infant will gain my sympathy.”

Sassan glared at him. “I asked you to stop…”

Sassan grabbed him by the shoulders and shook him. “Why aren’t you obeying me?

“I am going to report you, Ahirom.”

At the mention of his name, Ahirom began to wave his hands and scream. “Ahirom! Ahirom!”

Suddenly, a sonic tidal wave reached heavenward from the tens of thousands below them at the worksite and beyond, tending livestock, working the fields, weaving, carrying babies, baking bread. Though the words were indistinguishable, the emotion of the heaven-rending sound released a rush of adrenaline into Sasson’s system.

“What is that sound? What is happening?”  “Hva er at lyder? Hva er begivenhet?”

Sasson pushed past Ahirom, beginning his long descent to the bottom of the stairs.  Ahirom followed. The men jostled and pushed as they joined the crush of men desperate to get to the ground, each one screaming nonsense noise: “Mova para fora de minha maneira!” “Ich muss meine Ehefrauen sehen!” “Hâte!” 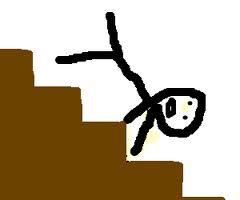 A bottleneck on those terrifying, narrow stairs; Sassan tried to push past a thrashing, panicked knot of child workers. His heel caught the edge of a step. He flailed wildly, grasping for something to stop his fall. Sassan’s damp hands slid off the smooth brick, and he grabbed two fistfuls of Ahirom’s robe before crashing into the wall behind him. The force flung the distracted Ahirom over the edge and the terrified man plummeted into the roaring babble below.

His scream needed no translation.

To contemplate: Have you had a communications breakdown with a family member, friend or coworker that has permanently destroyed your relationship with that person?  How has being “exiled” from that relationship affected you? What has the broken relationship taught you about God?