Creator of all, before the words that transformed work into a a curse, you gave labor to man and woman as a gift full of dignity and meaning. And even after the great rent in the relationship, but immediately before Man and Woman were sent to make their way in the world in pain and sweat, a single sentence tells us that there would be an echo of Eden’s  in all the toil  that followed:

“Adamnamed his wife Eve,because she would become the mother of all the living.” – Gen. 3:20

Man named. He’d been doing this sacred work before things went so very wrong, giving names to every living creature save Woman. The timing of this final task, creating this final name, came after the curse was pronounced, but before being sent out into the world to toil east of Eden. This naming was the kind of work Adam had been given to do since God breathed life into him.

There is still a residual piece of Eden in all of our work, Lord God. In repairing a broken motor. In building a house. In combining a field. In teaching a child to read. In analyzing data.In the sweat and the tears of living in a world outside of Eden and before heaven, there is an inherent dignity and meaning in the act of work. 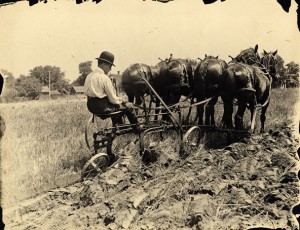 This day in this country, many remember the organized struggle to reclaim dignity and meaning in work. It is, at some level, nod to a memory. This day, we remember that the story of labor began in a Garden.

Because we remember, God, we pray for those among us who don’t have work. The unemployed. The underemployed. Those who will sit in hard plastic chairs at the unemployment office tomorrow morning. Those who click on their inbox and receive dozens of form rejections. Those whose businesses have failed. Those whose crops have withered from scorching heat.

Please, Lord, have mercy on those who are not sure where their next meal is coming from. Who would give anything to earn a living by the sweat of their brow again. I ask for the gift of work for the many we know who are feeling that the Garden’s curse of work with pain is a lesser curse than not working at all.

Sustain them, Lord. Draw them to yourself. Kindle hope in you.