Author Margaret Feinberg has been blogging during this season of Lent about what she’s given up during the 40-day observance. No, not chocolate or facebook. She’s given up prayer.
Her provocatively-titled vow is really more about getting out of the habit of talking at God than it is abandoning communication (and communion!) with him.
It triggered a memory of one of my own journeys – yes, the plural is meant to be there – through prayerlessness. Mine had to do more with fear of engagement than a need to filter myself, but the end result was the same. I learned to pray by not praying.
Go figure. 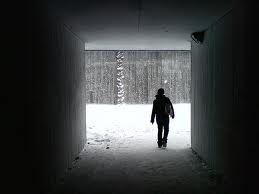 The parking lot was nearly empty. I turned off my car’s engine and sat statue-still in the darkness, listening to the steady rush of traffic on the nearby highway. Eventually, I tried breaking the silence inside the vehicle with a flurry of words, but it seemed each syllable plastered itself to the roof over my head. After waiting for forty-five minutes for some sort of breakthrough, I shook my head in frustration, turned the key and headed toward home. Nothing had changed.

I came to the vacant lot hoping I could discover a re-entry ramp to the prayer life that had sustained and guided me throughout a half a lifetime of following Christ. I’d gradually stopped communicating with God a few months before my parking lot showdown. What I didn’t realize at the time was that my self-imposed prayer exile was actually leading me toward a more mature, healthy relationship with God than I’d had to that point.

A painful family crisis had marked the start of this months-long, thick silence between God and I. In shock, I’d let the intercession of others carry me during the early days of the emergency. As the dust settled, prayer was a painful reminder of all that had changed in the situation…and in me. In hopes of staunching the pain, I gradually stopped praying. I sensed that if were to draw near to God, I would again be called into a battle I had no energy to continue fighting.

What drew me to the parking lot that night was my growing awareness that I’d gotten a little too comfortable with wearing a hypocrite’s mask. Accountability wasn’t the issue for me. I had trusted friends with whom I could be honest if I’d chosen to do so. The truth of the matter was that I simply didn’t want their intervention.

I continued to talk about God with others the way I always had B.C. – before the crisis. In fact, I found it a little eerie how easy it was to talk about God, even though I hadn’t spoken with Him in months. I continued to participate in church life, though faking my way through a worship service had become the longest hour or so of my week.

I didn’t want to fake it anymore. But as I left the parking lot that night, I felt that my prayerless prayer life was intact.

As I drove home, I realized there was no express lane “on ramp” back into the kind of prayer life I once cherished. I couldn’t go back. It occurred to me that the act of showing up in the parking lot was itself a kind of prayer, a wobbly first step forward after months of stagnation.

I’d been toying with the idea of walking away from the Christian life in order to put an end to my own hypocrisy, but Peter’s famous question/answer kept me from bolting entirely: “Lord, to whom shall we go? You have the words of eternal life”. I couldn’t leave Him, even though I wasn’t doing any communicating with Him.

My former prayer life was defined by working my way through prayer lists, attending church prayer meetings, and by on-the-fly cries for God’s help and wisdom. These habits hadn’t carried me through a life-altering trial. The grief I felt as I mourned the loss of my comfortable past had soaked deeply into what was, to that point, my relatively-untested faith.

Acknowledging that I’d been encamped in grief’s shadowy valley brought a bit of clarity to my silence. The theological truth I’d known intellectually began to gain a bit of traction in my prayerless soul: Nothing I did could make God love me more…or less.

I didn’t have to pray. He loved me anyway.

I’d spent years building the discipline of prayer into my life – a wise pursuit. But I’d quietly injected little doses of pride at my ability to maintain the discipline into the equation. Pride in my own performance had been silently eroding my prayer life long before I stopped praying. The crisis shattered some of that pride. And my months of broadcast silence served to further strip my reliance on what I could do for God. I realized He was not impressed by my effort or earnestness. Those efforts had not stopped the trial from coming into my life. I’d harbored some unspoken and childish ideas about what was supposed to happen when I prayed. I’d frequently treated prayer as a spiritual bank account. If I deposited enough of the right sort of words, God would fix my problems and bless my life.  The book of Job offered me a bracing counterpoint to that stinkin’ thinkin’. Job had his livelihood, family and health stripped from him without warning. He had friends and even his own wife all pouring words like acid onto his broken heart as he struggled to understand why his life had taken such a terrible turn. Job didn’t curse God. He didn’t walk away. And He didn’t retreat into silence. Job’s raw, feisty responses to those around him were drawn from the same place deep within him from which his lifetime of worship had come. His trust was not in God’s blessings, but in God Himself.   My trials were not Job’s trials, nor was my trust Job’s trust. But God was doing for me what I couldn’t do for myself. Christ was interceding for me. “Therefore He is able to save completely those who come to God through him, because he always lives to intercede for them”. His perfect sacrifice covered each moment of my life, whether it was a moment filled with faith-filled words or doubt-filled silence.  After that frustrating experience in the parking lot, I considered that though I was silent, He was not. “We do not know what we ought to pray for, but the Spirit himself intercedes for us with groans that words cannot express. And he who searches our hearts knows the mind of the Spirit, because the Spirit intercedes for the saints in accordance with God’s will” . He was communicating with the Father with love for me that far exceeded what language could contain. My prayerlessness was punctuated with His efforts to translate those groans into syllables I could comprehend: a song written by a friend, the words of which mirrored my struggle; a sense of God’s company during the lonely hours I often spent awake in the middle of the night; a phone call from an old friend who’d experienced the same sort of crisis my family had. Even in the midst of my silence, I was not alone. My prayerlessness served to unmask my sinful hypocrisy and show me the truth about my self-congratulatory efforts at prayer. Ironically, though my family crisis made me question God’s love for me, the months of prayerlessness that followed helped me experience God’s relentless, patient love for me. Though not praying would never make it into anyone’s suggested toolkit to nurture spiritual growth, God used my silence with Him to coax me toward a more mature understanding of prayer.After my parking lot showdown, I did choose to confess my ongoing struggle to a couple of close friends. Thankfully, they didn’t rush in and try to solve my problem.  They listened, and one of them prayed a simple prayer for all of us: “Lord, teach us to pray.” I realized that that’s exactly what He had been doing when I wasn’t praying.